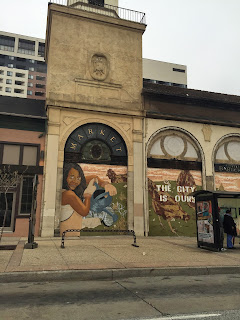 "The City is Ours"For my last adventure blog, I was looking for a piece of artwork that I really liked. There are a lot of places with street art, as well as art on buildings. This one stood out to me because of the words on it. After all of the events that have taken place in Baltimore, the phrase "this is our city' means so much more. This is why our class is so important. And it is also important to continue the Baltimore Traces, as well as research on Baltimore. We have to show people the beauty in station north, as well as other small areas that are developing into better communities. In taking this class, I have learned to appreciate my city even more. I hope to continue exploring parts of Baltimore I have never been to, and to continue to learn the history behind them.
Posted by Unknown at 11:21 AM No comments:


The Jubilee Baltimore Inc Story:
Jubilee is a nonprofit organization that is located on Calvert Street, and is dedicated to create houses for those with low income. Neal Harris was the founder of the Jubilee Baltimore Inc. He used to be in the plastics industry where he was the president of the company. After a couple years of doing this, he started working with a church to help with those who had been evicted from their homes, and needed somewhere to stay. With many fundraising strategies, he was able to fund his own company that would help those who needed low income housing. When he first began his main focus was on the homes in Southeast Baltimore. He was especially interested in the homes that were in gentrifying neighborhoods. During his time spent as the president of the foundation, he also established Jubilee Jobs. He knew that in order to stay in these homes, individuals would have to be able to support themselves.
The company was then lead by Charlie Duff. We have to keep in mind that Neal was in 60’s when he founded the company, so he wasn’t active in the company for long. Neal unfortunately passed away years later, but the legacy he created continue to grow. Under the leadership of Charlie, more than 100 houses and apartments were developed. This company was Baltimore’s leading developer of mixed income housing. This was especially important to those artist in the community. The success of this company was shown through the 2,000 individuals that benefited from the many developed houses. This success also led to the connection with the Midtown Development Corporation. This corporation wanted the help of Jubilee to attract good neighbors and rebuild historic row homes. Not only was this company helping out those in need, but it was giving light to the many neighborhoods that needed to be seen.
Now the company helps those in Central, Midtown, and Southeast Baltimore. They work on revitalizing neighborhoods, Assisting in Developments, and community planning.  The company is able to act as a developer as well as a development consultant. What once was a vacant property is now the city arts building. This new construction helped house almost 70 units for working artist. Jubilee has also partnered with another non profit company TRF ( The Reinvestment fund).  This company is known for having the best affordable home specialist. Of course that is one of a hundred projects that the Jubilee has created. Currently the Jubilee is working on The Centre. This will be the largest development created by the Jubilee. This is a 18 million dollar project that will be a center for the arts and innovation in Station North. The Jubilee is also well connected with those in the community. They give tours around the city as well as throw events. Individuals can contact them, read their newsletter, and follow them on facebook. They really value the help and opinion of those in the community.
Posted by Unknown at 6:05 PM No comments:

I can't believe that the semester has come to an end! When I first signed up for the course I thought I would already know so much because I am from Baltimore. But as the weeks went by, I found myself learning more and more things about Baltimore. I used to take the city to school,  and I would past North Ave all the time. I never knew that the area was an arts district or that it was called Station North. I also didn't know I would learn so much about the history of Baltimore from the Baltimore 68' book. Very happy I took this class because I learned so many new things about the city I grew up in. I also think having the protest occur during this time made the class even more special.

The most important thing that I have learned during this semester is how to engage with a community. I was able to engage with people in the community when I did my adventure blogs, and when I had to interview people for our project. I feel that this is important because you learn so much about what is going on in the community. If I never enrolled in this class I probably wouldn't have gone into SNAC. Being able to engage with those in station north has opened my eyes to more businesses around there. I have realized that my support means a lot to them.

My best contribution to the course project was just helping in areas that needed me. I interviewed people as well as transcribed. I also helped with the listening assignments and "the ask" we created. I think just being able to do more in the project was a great contribution. I came into the group thinking I would only do one thing, and ended up doing several.

When filling out the survey again for the class, it was funny to see how different my answers were. In the beginning I felt like I only knew a little bit about the history, and at the end I felt like I had a solid idea of the history of Baltimore. I also knew NOTHING about the arts district and now I feel like I am a pro. It's just amazing how one class can change you perspective on Baltimore within a semester!

This has class has taught me a lot about Baltimore and I'm it will continue in the Baltimore Traces project!
Posted by Unknown at 2:55 PM No comments: 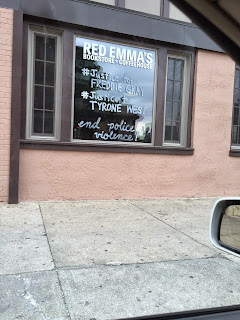 On Friday May 1st, I decided to embrace what was going on in the city. I decided to see what was going on around station north too. When I stopped at Red Emma's I remember the class talking about how they helped give out food to kids who were hungry. I then saw "justice for Freddie Gray" on the window. This stood out to me because we have talked about Red Emma's not being a place where diversity is seen. We also talked about how it's not a space where people can come and relax. But over the past few days we have seen such a dramatic change in what they are doing and promoting. The community has been coming together, and to see that they are apart of that is really awesome. During this time I also rode around the city with dozens of cars. It was called "ride for Freddie Gray". Riding through Station North, Downtown, and West Baltimore really made me feel better. At first I was scared to come to the city, but I am glad I did!

Posted by Unknown at 5:38 PM No comments:

I am now finishing my Alethia Shin interview. Transcribing was giving me hard time, but a student introduced the class to Otranscribe. This site lets you slow down the interview that way it is easier to type. As this project comes to an end, my classmates are making sure they are helping each other in anyway that they can. With events going on in Baltimore we are still making sure that we focus on this project. We are also appreciating this project a little more, because of what going on. It's like this movement and the movement of station north will be heard and noticed even more. I'm excited to hear our last piece on the radio. I also am excited to see what Marc thinks of the audio that we will give him this week.
Posted by Unknown at 2:33 PM No comments:

This week has been very stressful. I have to transcribe a long interview, and I am also going to interview someone this thursday. I have also been assigned to do another interview and pull out themes. With the stress of this semester and the stress of this class, it has been very hard. I think that we are making progress, but we didn't realize how much work we had to do. We could have been doing a lot of the things that we are cramming now, overtime instead of the waiting to the last minute. I agree with what Marc said about the piece needing a little bit more debate, or real issues in the community. Hopefully after these new interviews are done, we will have more of story for our piece. We have to realize that people will get bored after awhile. we have to make sure they are entertained for the full 30 minutes, and are really listening to what individuals have to say. Hopefully through the stress will come a great project for station north and those in the community. With these voices I hope that more people in the Baltimore area will support Station North, and really recognize it for all the beauty it holds.
Posted by Unknown at 12:00 PM No comments:

Last week the class made a lot of progress by transcribing the interviews we had. I feel that we need to stop worrying about getting new interviews, and worry about putting the piece together. We already have hours worth of audio that has to be put into a 30 min piece. I think we have enough valuable material to have a great project. I wish that we talked to more residents, but those who come after us can learn from our mistakes.
I am ready to try and get an event set up as well.
I am also excited to see what Marc thinks of what we have so far!
Posted by Unknown at 6:06 PM No comments: